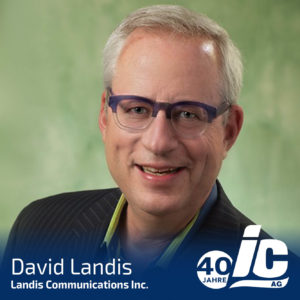 “1979: what a year! Pop star Michael Jackson released his megahit album “Off The Wall”; Karl Carstens took over as Germany’s President July 1; and US President Jimmy Carter signed the SALT II agreement with the USSR’s Leonid Brezhnev. But, the biggest news of all? Industrie Contact was born in the humble burg of Hamburg. What an accomplishment: most businesses don’t last 10 years or 20 years, but 40 years? You folks are definitely doing something right. All of us at LCI in San Francisco applaud you. When it comes to marketing communications, digital and social media, you’re the tops on our list. Happy anniversary and here’s to 40 more years!”