Uwe: Gisele, the World Cup in Brazil: How does it feel for you as Brazilian?

Gisele: We are very proud to host a global event like this and, in two years, Brazil will also host the Olympic Games in Rio de Janeiro. Soccer is a Brazilian national passion and, despite all social issues and investments questions, it will be a special year for us. It’s an opportunity to reinforce our image as a great host, to present our culture and ability to do business. We hope everyone leaves Brazil with “saudades” (home sickness, nostalgia), a Brazilian word that makes sense only for those who have experienced Brazil.

Uwe: What do you do as agency during the World Cup?

Gisele: Crisis management and fast opportunities make the difference now. The social movements (not against the World Cup but against huge investments and other public issues taking the global event as background) are serious risks for some companies that have to be monitored, especially in the fast social media. As an example, we are using a tool that gives us in real time a very clear view of each social movement in the social media. It shows when, where and how riots, public demonstrations or similar initiatives show up. As positive impacts, we are anxiously waiting for the next months, hoping that global companies look to Brazil as a solid market, with passionate people and rich in business opportunities.

Uwe: What about the social problems: Will they be solved soon?

Gisele: This social movement acts very fast using social media tools and functions without formal leaders. People fight against high bus fares and corruption, for affordable housing, against or in favor of a particular law. A large part of these protests are peaceful. In other words, it is a democratic exercise. It is important to remember that foreign media only show the violent protests, following the rule “only bad news are good news”! But today above all, Brazil breathes football. We are pinning high hopes on our Seleção, our national team, and it is a great joy hosting so many guests from all around the globe. Brazil is, at this moment, just a great party!

Uwe: What do you hope most for the World Cup?

Gisele: As Brazilian I hope for a happy and festive month. As PR person, I hope for new business opportunities in the next months as global companies can discover us as profitable market with high level professionals.

Uwe: Gisele, muito obrigado. I won’t ask a Brazilian who will hold the World Cup in their hands. But I’d like to ask you about your favorite final.

Gisele: Brazil deserves the Cup! But … there are many other countries that play very good football: Germany, Spain, France, Argentina, England and even Italy are very, very strong. So a final between Brazil and one of these countries would be very nice! But, my friend, we have to wait until July, 13th! 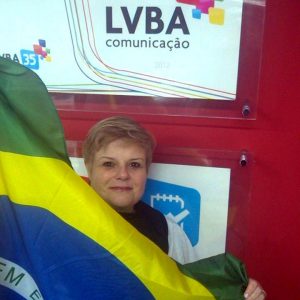