For 50 years now, the Supervisory Board member of Industrie-Contact, Prof. Horst W. Opaschowski (78), has been analysing developments in Germany. He deals with all areas of life and draws up forecasts for the future. Now he has published the book “Wissen, was wird – Eine kleine Geschichte der Zukunft Deutschlands”.

Here on the one hand he concerns himself with its earlier theses, in order to look, was he always right about his views. Yes, very often he was. On the other hand, however, he also looks into the here and now and ahead. An exciting book. In this blog we want to focus on the present and the future.

The Germans in search of meaning 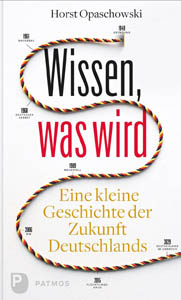 At present Opaschowski expects a return to values and family: honesty, friendliness, reliability, helpfulness, respect, decency and correct behaviour he lists as important values. “The return of old values is a response to the economic and political crises of our time,” explains the expert.

The quest for meaning remains – the classical religious is disappearing

Religiosity is not lost in our secular world, but people seek it less and less in churches. The meaning of life is no longer located in the afterlife, but in family, circle of friends, neighbourhood and community. The most important thing for people is the family: 90 percent of Germans see it that way.

“For every job lost because of robots, a new job is created in a different industry.” This thesis comes as a surprise because the goal of robots is always rationalization and the associated cost savings.

Opaschowski sees a rising “digital pessimism” and a trend towards switching off. But is this also true for the generation of digital natives, digital nomads and millennials?

The futurologist considers artificial intelligence (AI) to be dangerous and an existential threat to humanity. He is not alone in this view. Critical voices around the world are increasingly heard that an AI that is becoming smarter and smarter might at some point wonder whether it actually still needs human beings.

Data security is an illusion

Opaschowski now considers data security to be an illusion. In addition, superficial network contacts would displace genuine friendship relations. In the end, this would leave overstrained, lonely and more aggressive people behind.

“Well-being for all” instead of “prosperity for all”

Opaschowski is, however, optimistic overall. His vision remains to realize the idea of a “well-being for all” instead of a “prosperity for all”, in which human values are important as well as material aspects.

The book title in the footsteps of Harari and Hawking